Kenya National Examinations Council (KNEC) officials were forced to intervene on Monday March 7 after it emerged that some candidates for the Kenya Certificate of Primary Education (KCPE) at Lugari Primary School, in Kakamega County, were not registered.

This forced officials to make a quick decision to photocopy exam papers for the 23 students who were affected and who had already settled into the exam hall.

Speaking to the media, West Regional Director of Education Steven Barongo confirmed the incident saying they were working around the clock to resolve the issue as the national test continues.

Barongo said the ministry has contacted its officials in the region to find out exactly what happened with student registration. He added that they would keep the public informed of their findings once their investigations are complete.

“We would like to know if the learners were registered or not and why, we will share more information as soon as we receive the briefing,” the official said.

It was the first day of KCPE exams across the country with students taking their math, English and composition exams.

On the other side, the principal of Rurii Primary School in Kirinyaga County, John Mwangi was arrested after refusing to admit a student to the exam hall due to arrears of fees.

After the intervention of the police and other ministry officials, the student was allowed to take the tests.

Investigations are still ongoing with preliminary reports indicating that the teacher will be charged with violating the learner’s right to education.

Earlier, Cabinet Secretary for Education George Magoha said no student would miss the exam due to outstanding areas. He warned principals and the headteacher that action would be taken against them if they turned away students.

“Primary and secondary schools will receive 2.1 billion shillings and 14.7 billion shillings respectively, which is enough to keep all students in school for at least the remaining eight weeks before the end of term, so no need to send students home.

“Never sympathize or become diplomatic with such school leaders, be sure to send them where they belong for mistreating students from modest backgrounds,” the CS warned at the time. 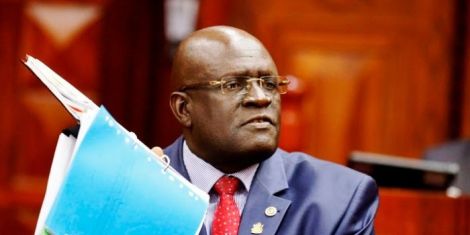 Cabinet Secretary for Education George Magoha at an earlier meeting in Parliament.