A medical worker is on duty amid the snow in Xi’an, northwest China’s Shaanxi Province, Dec. 25, 2021.Photo:Xinhua

Xi’an, capital of northwest China’s Shaanxi Province, has sent tens of thousands of officials to join frontline staff working in residential areas across the city to eradicate the coronavirus.

The megalopolis, with a population of 13 million, imposed closed management of communities and villages on Thursday, in a bid to contain the latest resurgence of COVID-19. Residents have also been urged not to leave the city unless absolutely necessary.

Chinese Vice Premier Sun Chunlan called for rapid virus containment measures to curb the spread of COVID-19 in Xi’an during a recent inspection in the city.

The province reported 78 confirmed cases of locally transmitted COVID-19 on Friday, including 75 cases in Xi’an. In the resurgence since Dec. 9, the province had reported 342 local cases, including 330 in Xi’an, according to the provincial health commission.

All of Shaanxi’s cases, with four severe cases, 134 moderate cases and 204 mild cases, are being treated at Xi’an Chest Hospital Liu Na, a provincial health commission official said on Saturday. of a press briefing. The patients, aged between one and 90 years, are all in stable condition.

Niu Jingqi, a judge from the Xi’an Intermediate People’s Court, was awakened by an urgent phone call at 5 a.m. Thursday, asking him to go to a residential area more than 20 km away before 7 a.m. 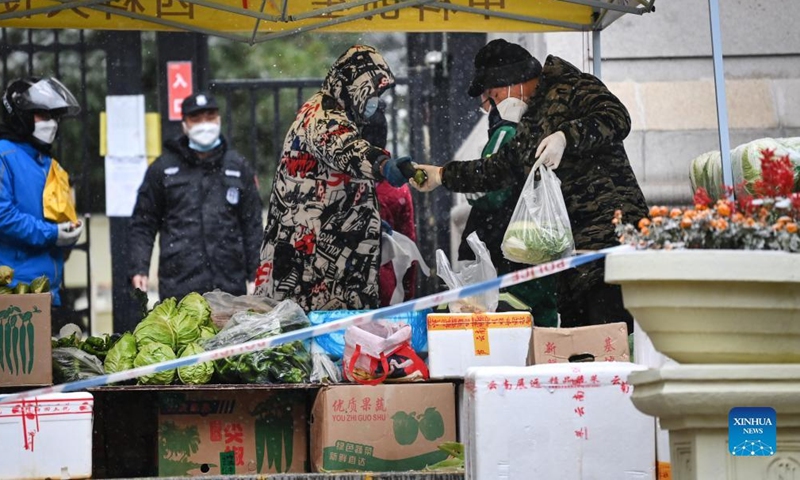 A vegetable market is set up at the entrance to a quarantined residential area in Xi’an, northwest China’s Shaanxi Province, Dec. 25, 2021 Photo: Xinhua

“More than half of the 18,000 people in this community are over 60 and do not know how to use the health code,” Niu said. “Therefore, we have set up a queue for people to register for the test with ID cards and organized early testing for the elderly who are physically weak.”

“My wife is a police officer and is also on the front lines these days. We do ordinary work, but we want to help fight the virus.” Niu’s 192 colleagues from the Xi’an Intermediate People’s Court are also working on the front lines.

“Many old residential communities do not offer property management services and we have to go door to door telling residents to join in the mass nucleic acid testing,” Fan said.

“As grassroots Party members and cadres, we should be running against time when the city suddenly came to a halt,” Fan said, adding that they often work until very late at night.

Xi’an authorities have also done everything possible to ensure that the national postgraduate entrance examination for around 135,000 applicants in the city as of Saturday runs smoothly amid a severe epidemic.

Authorities have sent employees to send exam copies to candidates who are in quarantine in designated locations.

Chang’an University provided face masks and hand sanitizers to all applicants and ensured that applicants could take nucleic acid tests every day. People with a sudden fever can take the test in isolated rooms.